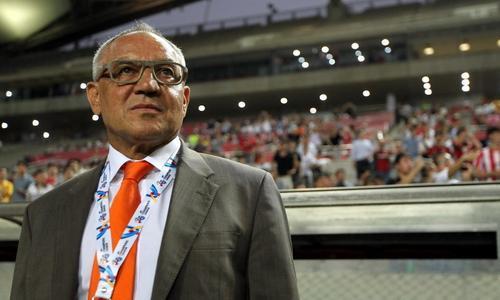 Tiger Fighting, October 20. Recently, media person Sun Lei interviewed Kunshan FC player Cui Peng. In the interview, Cui Peng shared how to face the negative energy in the Internet, and the anecdote and anecdote of getting along with Magath, the "devil coach" at Luneng. Feeling and training experience in Kunshan FC.

Cui Peng: There is no need to argue with them about this thing, but sometimes many online media, including the information age, are spreading faster and faster on the Internet, and there are no legal restrictions. You can say it casually, but I can’t say it. What, and I think it is, because I sometimes watch a lot of things on the Internet now, I don't like to watch things online, it turned out that this kind of negative energy has brought me so much.

Sun Lei: Yes, I particularly agree with this.

Cui Peng: Including that after I have a child, sometimes I read articles about parenting, and sometimes there will be something next to the article about parenting. What is the cause of this child's misfortune? Why should such things be posted online? I think it’s painful enough for people to leave. Why do you go to the Internet to ferment this matter? What do you want everyone to meditate on? Instead, it brings some bad emotions to us parents with children, so I don’t say anything to my children. In my world, my children don’t say anything. I want to think about it all the time. How to protect him, so my wife sacrificed more in this regard.

Sun Lei: You are a very caring person by accident.

Cui Peng: I have a lot of ideas. I actually want to say what I have, but as I grow older and as the time I integrate into society becomes longer and longer, I gradually have to understand a lot of things, so it’s not just like I was smashed by someone. Because of my job, I was stabbed in the back by someone, and my life might be the opposite of this style.

Because after I was used by this method, I might be particularly resistant to this, so I said that I don’t like something hidden and tucked away, I like something, you can hate me, you can also do not like me, including me Communicate with other players in this team, you can dislike me, you can hate me, but I tell you what I want to help you. Of course I think you hate me, dislike me, and when you don’t like this method, I won’t communicate with you. Since you think everything you do is right, you can do it and use the competition to verify it. This thing is normal. of.

Cui Peng: Because I used to say very early that I would practice those physical stamina and other things all day long, and I said it was useful. I was tired enough and I didn’t want to run because I felt happy with the ball. You can fight any way you want,

Because he wanted to find a midfielder at the time, after he was recruited, when I was leading the team in Magat, he made me understand the meaning of physical fitness again.

I remember riding a bicycle there. From the beginning, the most basic entry level, I remember 60 minutes, and then there was a heart rate belt, and the heart rate belt had to keep the pulse to 110-120, and I rode for 60 minutes. I calculated it and rode it. I rode the class for 60 minutes and rode 45 kilometers. According to what I said, I rode to the airport all the time and rode the airport back and forth. Including the treadmill, we may usually jog at 8 speed, even if the 10 speed is faster, it is 12 speed, and it lasts for 60 to 90 minutes, that's it.

So it’s not that people can’t endure hardship, but at that time the body did lose weight. At that time, he also said that you can’t skip meals, including at that time Magath looked at how much I saw.

I said yes, I said to run with you at 2:30. As soon as we arrive at the venue, we will be both of us, as well as the translator,

Sun Lei: Haha, then you go on running again by yourself?

Cui Peng: Yes, I will run on my own, I have to finish training. This thing means that his expectations of me are actually very high. In fact, when I was in Magath, he already wanted me to appear on the stage when I was ready. Before Li Xiaopeng took office,

At that time, it was a person who was fatter than me, and it fell on my knees. I was very scared at the time because I had a ligament surgery before, and I just recovered. I just returned from Germany, and then I recovered after arriving at Luneng. I pressed it again.

I thought it was broken, I thought I couldn't break it again. Fortunately, the lateral collateral ligament is a bit torn, but it takes three weeks to raise the league. The three-week league is over. Therefore, including all aspects of the public opinion orientation behind, let Li Xiaopeng and Li lead so much pressure.

Sun Lei: He will relax.

Cui Peng: Yes, what I said is different, so it may be this kind of accident, and it was delayed for a while.

Sun Lei: I think I will soon be able to compete.

Cui Peng: Yes, and I belong to the kind of person who wants to win at all times on the court, and to be strong. Because I was a little thinner at the time, when I got up, I hit the person and didn't think it touched him. I was a little angry, and wanted to come up and knock him down. As a result, he pressed me on my leg, so I said some things were just such a coincidence.

Sun Lei: But in fact, you are not afraid of being trained, you are afraid of not being trusted.

I was saying that the day before I practiced physical fitness, pure laps, and then the next day was the 1993 batch, people like Wang Tong, Wu Xinghan, Liu Binbin, Li Songyi and others, including Luo Senwen at that time, these people ran, It was the second day to run, because Tenkater was quite good at the time, but let me run again the next day, haha

Cui Peng: Yes, I ran for two days, and then I thought I wouldn’t die anyway, so I ran. If I can't die, why should I compromise? I just run.

Cui Peng: Younger, 22 or 23 years old. So I am not a person who is afraid of being trained, including in Kunshan, I remember that there were three days, the first day was 11,000 meters, and then the variable speed running, then 36 times on the second day, 30 meters sprint, and then the third day It ran another 8000 meters. I might have to talk about it if I put it aside, but you know that I and Gao Yao (Gao Yao) are also teammates who have played before.

And here, I can’t say let others say that he is nepotism, so sometimes it is said that you have played with a high-level coach or how, in fact, I practiced hardest here.

It is impossible to eat less because it is going to compete, but after I finish eating, I have to consume it. So every time I finish training, after training in the afternoon, I have a bite of meal with my family in the evening. After the meal, it’s time to get better, because I need to measure my weight the next day, I will consume it again, then I will continue Run.

Cui Peng: I was running very confused, because of the heat, I was buzzing in my head, I don’t know, I said that I suffered this crime, there is no way, you want to continue kicking, you want to fight for it, just like others might not need Lose weight, he gets a little fatter, as long as he has reached his ability, he will say no problem, but my family has given you a label. If you do not change, they will continue to use this to talk about you.